Drawing is something I have always done. When I began painting, I formulated an approach that necessitated a consistent commitment of time, and when I chose to have a family, I knew there would be concessions necessary. I would no longer have the luxury of time to paint plein air and consistently work in my studio. My process of picture making; plein air studies, sketching compositions, and developing large paintings, would have to be adapted to be a dad and support my family. 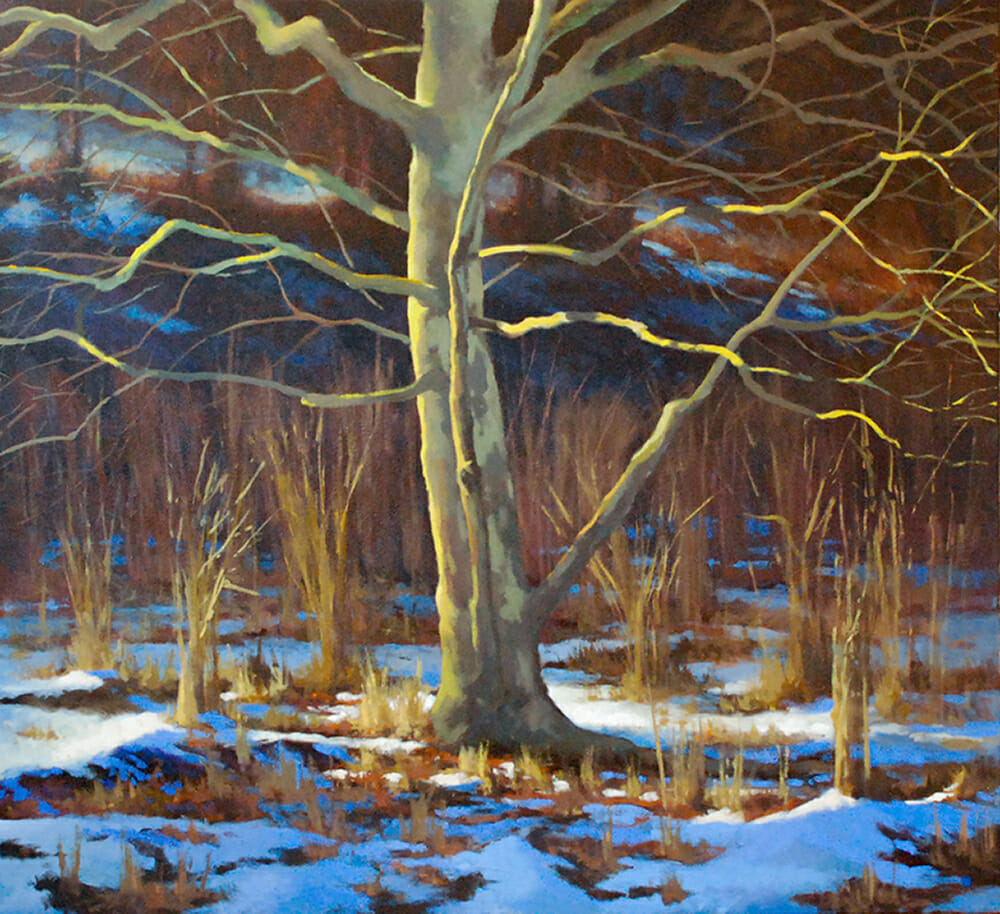 Inspiration came from images that flashed by my car window at 60 miles per hour, or glimpses of the setting sun on a stand of saplings became the fodder for my imagination. Where before, I worked from life, I began to exercise my visual memory. Details were abandoned, and imagery was reduced to only essential components. I have always kept sketchbooks to sort out ideas for paintings. Now, when time allowed, I would record what I could recall. I wanted the images to remain representational, but the simple drawings became less attached to the landscape. Instead, the landscape became an abstraction, a design opportunity to explore composition and color in a different way. A new process for making paintings began to evolve.

I approached painting as directly as possible, working “alla prima”, or “at first attempt”, completing a work in a single painting session. I began with a series of warm-up exercises; small, quick color compositions on paper. When I felt ready, I would place a large canvas on my easel and begin the work without any preconceived idea of the outcome. The painting evolved from the very first brush stroke guided by intuition and the first color selection. I referred to this approach as “unintentional painting,” allowing the work to evolve as it did, without planning.

When I began to exhibit this work, it was very well received. People were drawn to the bold color and simplified shapes. It was recognizable and relatable as landscape and the vigorous brush work conveyed a sense of energy and vitality. Many viewers responded to the paintings with nostalgia, saying that they were reminded of familiar images, or comfortable memories from the past. I felt as though this unintentional work had somehow tapped into a collective consciousness.

circumstances turned my world upside down. The path I was on abruptly ended. I was no longer able to find the inspiration to make bold, brilliantly colored pictures, so I set about finding my way on a new journey. I moved into the borough of West Chester and began painting plein air again. This approach is the direct opposite of spontaneous, unintentional paintings. My subject is still the landscape, and the dominant themes of color and composition remain.

What has changed is my focus on my subject. I’m fascinated by the effects of light and atmosphere, the time of day, and change of the seasons. In sharp contrast to the spontaneity of alla prima paintings, studio paintings are carefully planned and frequently preceded by numerous small plein air and studio color and compositional studies. Where before, the constraints upon my time allowed me to see the world only in passing, I’m now afforded the opportunity to study it more intently, and gain a deeper understanding and greater appreciation for the natural beauty of our world and the complex, interwoven processes of nature.